More and more American superheroes have come out over the last decade, and gay characters abound in US and European TV shows. In Belgian comics, however, their presence remains a rarity, even as supporting characters or extras.

Yann was one of the few who tried to break this taboo in popular comics culture. He published Bob Marone in 1983, a parody of the classic Bob Morane by Henri Vernes. In Bob Marone, the protagonists, Bob and Bill, are gay, a fact that stirred controversy in the small world of comics. For Yann, this wouldn’t be the first time. “It wasn’t much better in France. In that same period, I had written a series on AIDS for L’Écho des Savanes, addressing issues like prostitution, abortion, suicide, unemployment and poverty. The Catholics protested and I was sued over and over… Even by a gay organization! All because I had showed social workers giving out condoms in the park to stop the epidemic. Unbelievable!”

It’s possible that, with a series such as Bob Marone, Yann had purposefully courted controversy, but to be fair, he went on to include gay characters in many of his subsequent series. In 2002, Les Innommables featured the coming out of a cynical character called Tony. In Les Éternels (2003), he gave a prominent role to a gay immigrant called Mehdi. In 2007, in Spirou’s Le Tombeau des Champignac, he used Seccotine to make insinuations about Spirou’s sexual orientation. “It makes the characters more interesting and more human,” said Yann, defending his decisions. By adding these sorts of details in creating his characters, he showed his aversion to the conventional characterization of heroes.

Looking closely at Belgian comics, what we do come across is a surprising number of lesbians, especially in popular contemporary series such as XIII and Largo Winch. It’s good for sales, and is mainly done to please straight men. But there are exceptions. The action in Zara, the second part of the (À Suivre) La Terre creuse series by Luc and François Schuiten, is set on a planet inhabited exclusively by women. The story is erotic without being trashy. The same goes for the science fiction trilogy The Forever War by Marvano and Joe Haldeman, where homosexuality is the societal norm, and only a hundred or so straight people remain, like a hopeless remnant of the past. “Some gay people found this book shocking, even scandalous,” said Haldeman.

Jessica Blandy is openly bisexual. Dufaux, the creator of the series, said his decision came as a bombshell. He recalls, “Many editors were shocked and outraged by her bisexuality.” Funnily enough, no one made quite the same fuss about the main character in the historic comic book Jhen by Jacques Martin and Jean Pleyers. In the volume titled Le Lys et l’Ogre, the eminent French marshal, Gilles de Rais, tries to sexually assault a twelve-year-old boy. “Go on, sweet child, make yourself comfortable, it’s hot in here… Take off that tabard.” We quickly jump to the next panel, where the half-undressed boy is making his escape through the window. The deference the series shows to a gay pedophile is deeply problematic. Gilles de Rais is not, in fact, a fictional character. He is sadly well known as a rapist and murderer of children. The series chooses to present him as Jhen’s friend. Far from being a monster, he’s merely portrayed as a man with a certain weakness.

Sexuality in Martin’s series has been a cause of intense debate. Much has been written and said about Enak and Alix’s relationship. “I remember two fans having a heated discussion during a book signing in Nice,” said Martin. “They were arguing about whether Alix was gay or straight. I had to separate them before they came to blows.”

Subtext can at times be rife. Especially when two protagonists live under the same roof, like Lambik and Jerome, Haddock and Tintin or Blake and Mortimer. Much has also been written about the Smurfs, in this regard. What were the little blue men smurfing before Smurfette arrived on the scene, we wonder? And of course there’s Vanity Smurf, who has garnered suspicion regarding his sexuality from the start.

Living out and proud

Only a handful of Belgian writers have been interested in the gay community. In 2001, Michel Dufranne released Triangle rose (Pink triangle), which was about the life of a young gay man in 1930s Berlin. His sexual orientation landed him in a concentration camp. The key Belgian figure in gay comics is Tom Bouden. Other than his gag-humor series Flikkerzicht (Living out and proud), in which he documents the hidden aspects of the gay scene, he is also known for Max and Sven, a coming-out story about a teenager grappling with his sexuality. Bouden’s work often features gay eroticism, including explicit sex scenes. “I make comics for and about gay people, sure, but does that make me a gay artist? What lies beneath the work? If you were to change up my characters to feature straight couples, would that make me a straight artist instead? Is that how it goes?” He explores the question further in Het belang van Ernst, a very personal adaptation of Oscar Wilde’s The Importance of Being Earnest. The characters are catapulted to the present day, but gay people are still excluded. Wilde’s original text remains almost unchanged. “I only deleted some annoying scenes about politics and I changed some words here and there,” Bouden explained. “The newspaper mentioned in the novel turned into a laptop, the cigar case became a condom pouch…” He even said that, had Wilde (1854-1900) been alive in the same modern era, this is what he himself would have written.

Transgenderism rarely features in Belgian comics. In 2013, Benoît Feroumont presented Giselle & Beatrice, a fun, erotic story that was meant to draw in a wide readership by approaching gender equality, or lack thereof, in a politically incorrect way. Beatrice, the protagonist, is a woman who has a penis, thanks to her witchcraft, while her lecherous, sexist boss, George, is made to live in a woman’s body. Stripped of the position he held, George, who is now Giselle, is forced to work as Beatrice’s cleaner. The tables have very much turned. It’s a popular trope, Feroumont is aware, but in any case he maintains the work was not meant to be a feminist manifesto. “Many points in the story would definitely clash with feminist ideals,” he said.

Apart from cropping up now and again in light-hearted series, genuinely transgender characters (be it transvestites, transgender people, transsexuals or other sexual minorities) are scarce in well-established comics. As ever, the exceptions prove the rule. Young Emilio, a main character in the pirate series Barracuda (2010), by Jérémy Petiqueux and Jean Dufaux, has dressed up as a woman and has been brave enough to say he feels more a woman than a man. Dufaux does his best to portray his characters’ state of mind in a non-judgmental way. More generally, Dufaux doesn’t shy away from tackling the vast and multifaceted spectrum of sexuality. 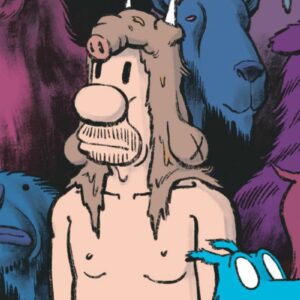 Look under your bed!