Julien Solé, aka Julien/CDM, is the son of artist Jean Solé. He was born in 1971 in the suburbs of Paris. In high school, with a group of artists that included Ralph Meyer, he contributed to the creation of a fanzine, before going on to study at the École Boulle in Paris, followed by the École Duperré, and finally starting his professional life at Fluide Glacial as a graphic artist. In 1997, Manu Larcenet began writing science fiction short stories for him, which turned into À l’ouest de l’infini (Fluide Glacial), and Solé would continue to explore the futurist genre in the years to come, publishing Cosmik Roger (Audie) and Planet Ranger (Le Lombard). Alongside Yan Lindingre, he then created the political satire Business is Business (Glénat, 2009) and the series The Zumbies (Audie), a punchy mix of rock and zombies. Having discovered a new passion for sharks, he published Shark Book (Audie 2014) and Les Requins (Le Lombard, La Petite Bédéthèque des saviors; The Little Book of Knowledge, IDW), with the help of marine biologist Bernard Séret. In parallel, Solé often works for La revue dessinée and Technikart, occasionally collaborating with writers such as Jorge Bernstein and Hervé Bourhis. In recent years, alongside Fabcaro, Solé has also produced the monthly page Zeropedia for the magazine Science & Vie Junior (published as an anthology by Dargaud in 2018, Europe Comics 2019). And switching creative gears somewhat, in 2018 he also published, alongside author Bernard Swysen, the first volume of the historical non-fiction series Les Méchants de l’Histoire (Dupuis; History’s Greatest Villains, Europe Comics), introducing readers to Vlad Dracula, otherwise known as Vlad the Impaler. 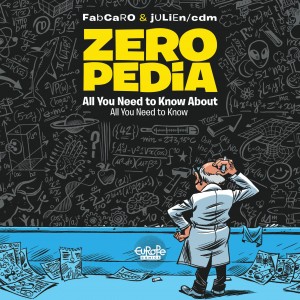 What was the Roswell incident? Why did people in the Stone Age paint pictures on cave walls? What is... 7,49€
Zeropedia Zeropedia Julien Solé & Fabcaro