Home > News > “I Don’t Like Characters That Don’t Change” 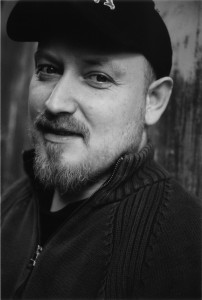 Manu Larcenet was born in 1969. At the age of 10 he launched himself into the world of comic books, drawing every day, and he would never look back. Over the years, his creative drive led him to join up with some of the greatest contemporary comics creators and publishers, covering an astounding range of topics and genres, from the zany Cosmonauts of the Future with Lewis Trondheim, to the magnificent series Ordinary Victories, and the incredible and unique Blast. You can discover more about this last series here below.

Manu, could you tell us more about Blast?

I wanted a change. I didn’t want to continue the path of Ordinary Victories. I wanted to do a slower narrative with more pages, more silence, more white space. I felt this urge when reading Japanese manga works, such as those by Jiro Taniguchi, where sometimes entire pages are filled with close-ups of “silence.” It creates a certain atmosphere. I wanted to achieve this Zen atmosphere, to allow more time for reflection… There is very little text.

Could you sum up the story of Blast for us?

The concept revolves around a guy who is held at the police station for two days where he tells his life story. So for 48 hours, the guy who is there for doing something brutal talks about himself, his story… It’s about change. How does one act when one feels bad in our society? What is our alternative? Ultimately, I don’t know. But in any case, throughout the four volumes I talk about the things that concerned me at that time. You see a multifaceted character who goes through the last six years of his life. You see him change. I don’t like characters that don’t change.

Was it a difficult work to create?

Extremely difficult! 200 pages… I didn’t anticipate that. If I did – I would have hired a studio, like they do in Japan. I spent a lot of time on the drawings, on the ink wash painting… It is a book that sits in between manga and a contemplative work. When I was working on Ordinary Victories, I was also following a character, but I was avoiding his dark side, whereas in Blast I followed the dark side alone. In order to succeed, you need to plunge yourself into difficulties. I hope it produced interesting results.