How is digital transforming the comic medium and market? It’s a fair question, and one tackled by Paul Gravett and his panel: Leah Moore (Electricomics), Russell Willis (Sequential) and Nicolas Lebedel (Izneo).

First, a poll: over half the audience have read a comic on a digital device, though only a couple say they prefer it to print. The issue is that the market for digital is loaded with potential, but are they realising it in comics? 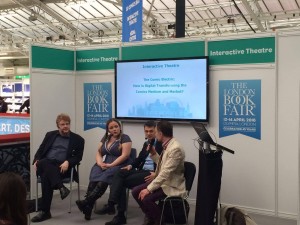 Comixology taking in about $100m per year shows that there is indeed potential. Superheroes in general are doing very well, but the digital app market from 2010 onwards is a graveyard of sorts: you can see the many that have tried, even with massive investment, and failed. In terms of sales and markets – it’s largely unexplored territory. The only way to work out what works best is ultimately a matter of time. People have to keep creatively pushing out there, embracing digital and testing flexibility.

In France, the market sees about 400m comics sold, which is c10%, and 1% of that cut is digital. They’re far behind the UK and US on that front. Digital offers an international vision to see outside your country, though it’s not used nearly as much as it could be in that sense.

Russell notes that he loves paper and he loves beautiful books, and he wouldn’t want to not have them printed, though he wants digital too. He’s happy to have digital only for something he’s not passionately involved with.  If Leah reads something and loves it, she has to then buy the comics.

Is print more navigable than digital? Here, we learn a new word: flippythroughiness (official term). It’s physically holding it, seeing where you are, flipping forward and back if need be. Digital is an infinite canvas with automatic holders, much easier to dip in and out of in one way, jump somewhere else, search and come back.

So when it comes to the reader experience on digital, what are the best parts? What would they improve? The obvious ones come up: zooming, HD images, the ability to get right in and look at the detail. For digital, the ability to read comics without wifi, when and where you want, is key. 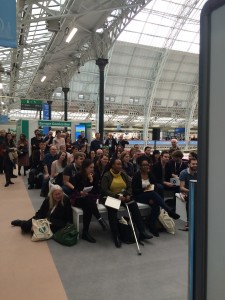 Leah says she’d love their app to have Facebook logins, so that people hardly notice and it’s all integrated. That’s a long way off though functionality-wise. To the reading side of experience, they tried four different ways  of reading: scrolling, tapping and so on. There’s not one she liked enough to say definitively it should be that over others, and variety is good. Though, everyone is swiping these days, so it seems the natural go-to.

Panel mode is another great one for digital: the ability to view them panel by panel, or in their set clusters when appropriate. It might not be an obvious positive to regular comic readers, but for newcomers, the ability to zone out the entire page and take it bit by bit is a good way into the genre. It’s also good for a small screen.

The one key plus digital has is you can’t tell the heft of a title on a device. It can be infinite in a sense. Just scratching the surface of the digital comics world, though there seems to be not only a lot to be positive about, but a lot left to explore.

Watch videos from How is digital transforming the comic medium and market? panel here. 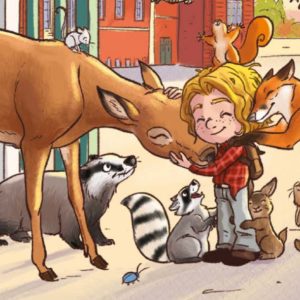