This year marked the 43rd annual Angoulême Comics Festival. For four days the medieval town of Angoulême turned into the world capital of comics and graphic novels – exhibiting books, artists and publishers from all over Europe, with a visibly growing number of international guests. 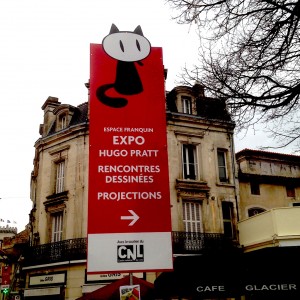 The second largest comics festival in Europe and the third biggest in the world, Angoulême Festival has been running since 1974 and is showing no signs of slowing down. And although this year has been surrounded by a fair amount of controversy (more on that later), the 2016 Festival still managed to amaze everyone with its numerous exhibitions, screenings, signings, talks and concerts that took over literally every single venue in town. 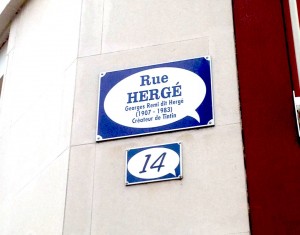 This year’s major highlight was The Art of Morris exhibition dedicated to the timeless hero of the Wild West – Lucky Luke, and his creator Morris. The exhibition opened on the first day of the festival and will be running until September 2016 showcasing over 150 original boards as well as toys created by Morris himself. Another major event, held at Espace Franquin (which happens to be the birthplace of the Festival), was an exhibition dedicated to another master of the 9th art – Hugo Pratt. 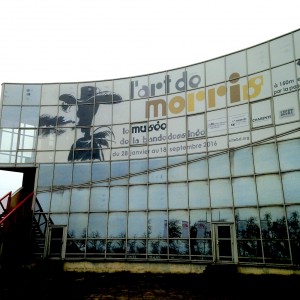 Filled with original black and white boards, sketches, watercolor paintings and photographs, the exhibition put extra emphasis on unfolding the literary influences that shaped Hugo Pratt’s most famous work – the adventures of Corto Maltese (published in English by The Library of American Comics). 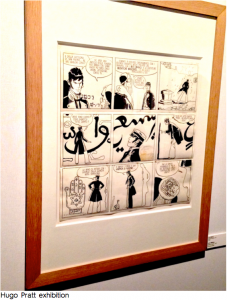 The same venue hosted one of the most mesmerizing events at the Angoulême Festival this year. Chronicles of Melvile – a live concert played to projections from the award-winning graphic novel by Romain Renard Melvile (published by Le Lombard). The author himself took the stage to play the soundtrack to his enigmatic work. You can get a glimpse of the concert here. 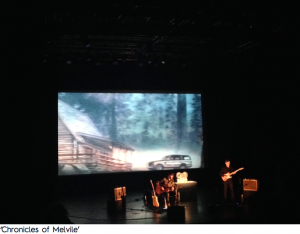 In addition to the variety of things to do and books to browse through – one of the best things about the Angoulême Festival is having all the incredibly talented comics and graphic novel creators in the same place doing signings, talks and meeting fans. 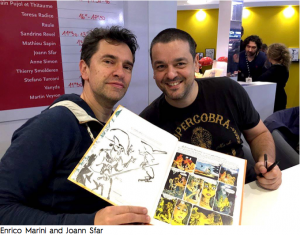 Our partners Dargaud and Le Lombard were at Angoulême hosting some of the biggest names in the world of comics today. With non-stop signings running throughout the day, the crowds were ecstatic! And so were we, as we got a chance to see so many authors form the Europe Comics list in action. Amongst those was the author of Blacksad – Juanjo Guarnido, author of The Eagles of Rome – Enrico Marini, creator of Esteban – Matthieu Bonhomme, and many more. You can view more pictures here. 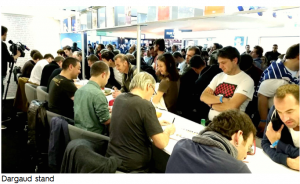 Although in its essence Angoulême Festival is dedicated to the readers, there is also a lot of work being done behind the scenes. Like other major European book fairs – Angoulême is the place where publishers come to buy and sell rights. 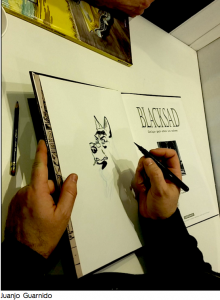 We were there with the Europe Comics coordinator Mediatoon Licensing, who handle the rights for Dargaud and Le Lombard titles. Based in the cosy Rights Centre, Mediatoon were also joined by a few other members of the Europe Comics family – Spain’s Dibbuks, Italy’s Tunué, Poland’s Timof , UK’s Cinebook and Turkey’s Akan Ajans.

The Rights Centre also hosted one of the most anticipated discussion panels of the Festival – Women in Comics and Graphic Novels in the English Speaking Market. The panel was organized in response to the protests surrounding this year’s Grand Prix d’Angouleme, which started after it was revealed that the shortlist for the Grand Prix (lifetime achievement award) did not include a single female among 30 creators nominated. 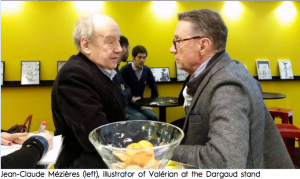 The panel, moderated by Calvin Reed of Publisher’s Weekly, consisted of cartoonists Sarah Howell and Cliodhna Lyons, Ted Adams of IDW, Angus Cargill of Faber, Colin Harvie and Christopher Perry of Glyphcore. The panel agreed, that despite the currently disadvantaged position of female creators in the industry, the situation is slowly changing for the better largely thanks to, what Calvin Reed described as ’an incredible renaissance in women creators’ as well as certain steps taken by the publishers. 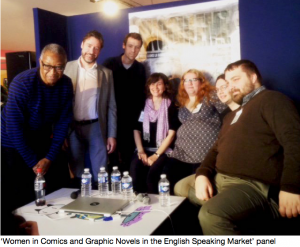 While some are actively looking for new female talent and employing knowledgeable female editors, others are concentrating on the content they publish and how they market it, ensuring that in the future it is handled in a gender neutral manner. You can listen to the whole podcast here.

Controversy aside, the time we spent in Angoulême was truly fantastic and we can’t wait to go back next year!