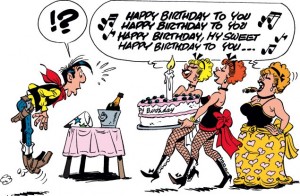 70! The streets of Angoulême were completely taken over by the famous cowboy who ‘shoots faster than his shadow’ – not a single place in town was left without a Lucky Luke tribute. 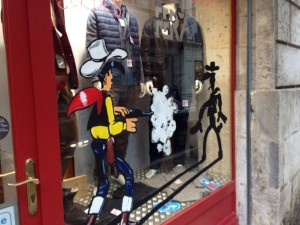 Chocolate shops, cloths shops, bookstores, restaurants and bakeries – all were decorated with outtakes from the famous series. Not to mention the Lucky Luke impersonator, who was patrolling the streets of Angoulême showcasing his cowboy skills together with his faithful companion Jolly Jumper. 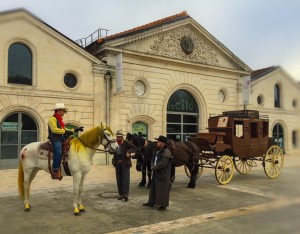 Meanwhile, the Festival’s venues were bursting with numerous events celebrating the big birthday. Although it was virtually impossible to visit them all, we tried to seize the opportunity and cover as many as we could! 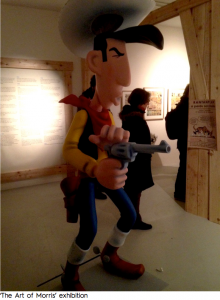 Our first stop was the largest exhibition opened on the first day of the Festival – The Art of Morris (a gorgeous reference book carrying the same name was released a month earlier by Dargaud). Morris created Lucky Luke back in 1946 for Spirou magazine. He then became one of the main artists of the magazine, as well as a member of the so-called Les band des quatre (Gang of four) with Jijé, André Franquin and Will. Morris’ great talent made Lucky Luke what it is today – the best-selling European comics series of all time, with over 300 million copies sold in more than 30 languages! The large exhibition space inside Angoulême’s Cité de la Bande Dessinée was filled with over 150 original boards, including some never before seen sketches. 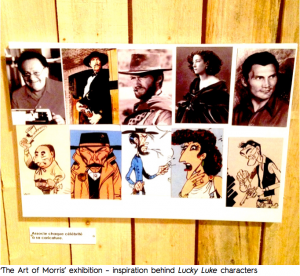 The curators made their selection for the show tracing the evolution of Morris’ drawing style. The collection was accompanied by a critical commentary as well as interviews, audiovisual footage, and original Lucky Luke toys made by Morris himself. You can see more pictures from the exhibition here. The exhibition will remain in Angoulême until September 2016. 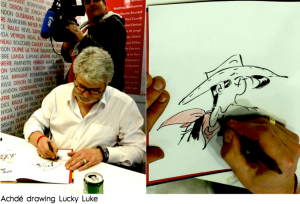 Various artists paid homage to Morris and his heroic character throughout the four days of the Festival. Achdé, who has been illustrating Lucky Luke since 2003, was at the Dargaud stand in the editors’ pavilion signing books, while Jul – the new scriptwriter for the Lucky Luke series visited 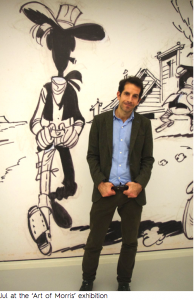 The Art of Morris exhibition and met with the young readers to tell them more about what they might expect from the future adventures of Lucky Luke. What’s more –  two Lucky Luke tribute albums, written and illustrated by Matthieu Bonhomme and Guillaume Bouzard, will see the light of day later this year. In advance of these celebratory publications, Casemate released a special edition of their magazine that gave readers a good glimpse into Matthieu Bonhomme’s tribute album. The free issue included 19 pages filled with boards from the upcoming volume accompanied by the author’s commentary. 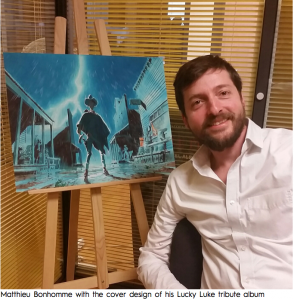 The French edition of Bonhomme’s album entitled L’homme qui tua Lucky Luke (The Man Who Killed Lucky Luke) will come out in April 2016. The digital English edition will join the Europe Comics catalog this summer, so stay tuned! Back at the Festival, author of the second tribute album Guillaume Bouzard met the young fans of Lucky Luke for a fun-filled drawing session. 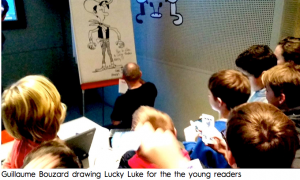 Bouzard’s album is due to come out in January 2017. In addition to these anniversary publications, Lucky Luke’s publisher, Dargaud, released a deluxe edition of Phil Defer – the 8th issue of the Lucky Luke series named after the hero’s arch enemy. The original issue was famously censored, as in this particular episode Lucky Luke kills off his nemesis. Morris had to rewrite the ending, leaving Phil Defer only injured. 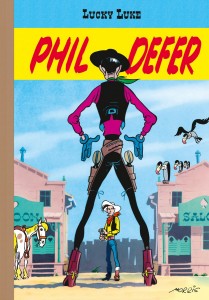 This year’s deluxe edition includes Morris’ original story – just as he intended it to be! 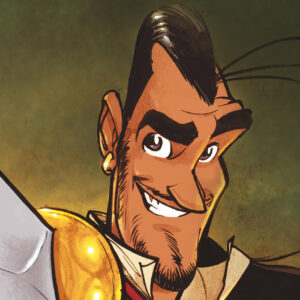