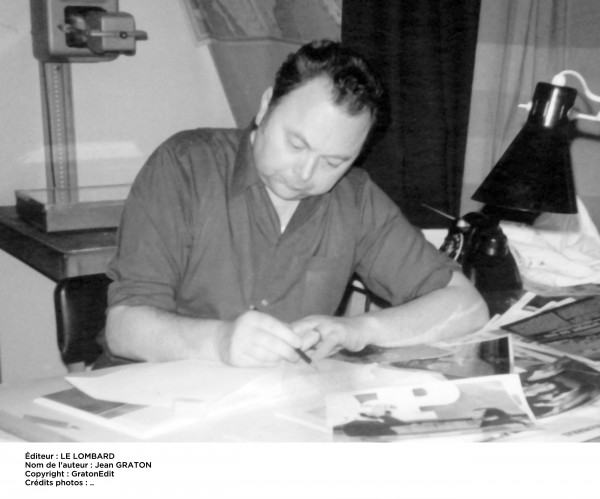 Born on 10 August 1923 in Nantes, France, Jean Graton is always surrounded by sputtering engines: his father is a prominent member of the motor club of Nantes and organises competitions. He is soon confronted with the difficulties of life, however. His mother dies when he is 11 years old, and a few years later his father is taken prisoner during the German invasion. In order to survive, young Jean goes to work at the town shipyard at the age of 17. Stationed in Angers during his military service shortly after the war, his drawing talent becomes useful: he is asked to decorate the mess walls. He plans to continue in this direction and moves to Brussels in 1947, where he has an aunt. He takes evening courses in advertising and illustrates for a studio which eventually gets to do the advertising of the newspaper LES SPORTS. An expert in subjects related to sports, one fine day he makes it to the office of Jean-Michel Charlier. As it happens, Oncle Paul has just been launched in SPIROU and the small firm is looking for illustrators. Graton quickly produces some twenty illustrations and is immediately forced to slow down, because the weekly cannot keep up with his production! He proposes an idea to tease their immediate competitor, the newspaper TINTIN where the decision to imitate the successful series has just been made. He is entrusted with the realisation of a complete sports story (La Première ronde, 1953). Although the editor, Raymond Leblanc, is quite pleased, it creates a storm. "I had a story in SPIROU and TINTIN in the same week," Graton recalls. "Even though we were only insignificant illustrators, it was still a scandal. I was told to make a choice ..." Leblanc immediately offers him an exclusive contract, promising him that he will drive a Ferrari within 5 years. Which will happen indeed ... on an outing when he is allowed to drive the boss' car! Graton produces numerous complete realistic stories and in 1956 suggests to his editor to bring to life a racing driver who might make an occasional appearance. Half a century later, this Michel Vaillant is still warmly welcomed by the fans and has featured in more than sixty books. The character soon hits it off with the readers. This gripping fictionalised reconstruction of the racing industry since the fifties takes up nearly all of the author's time, although he also creates a more sentimental family series in 1966, Les Labourdet, for the weekly CHEZ NOUS. In 1975 he develops a parallel heroine, the motorcyclist Julie Wood, who will be integrated into the world of Michel Vaillant eight years later when the production of the latter requires all the artist's energy. Graton founds his own publishing house in 1981, Graton Éditeur, with his son Philippe securely at the wheel. One is never safer than among relatives! Philippe Graton has been contributing to his father's scripts since 1994. 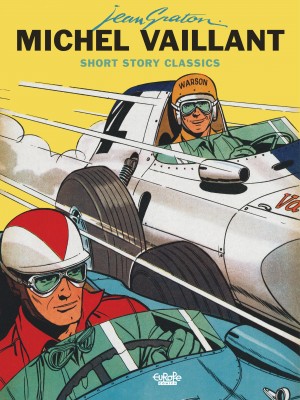 In 1957, Jean Graton created the legendary race car driver Michel Vaillant, who was featured in a series of short stories published in Tintin magazine. These stories marked the beginning of a... 4,99€
Michel Vaillant Short Story Classics Jean Graton