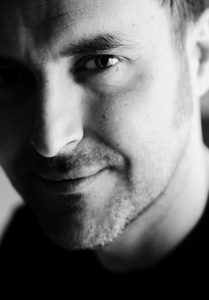 José Luis Munuera was born in 1972 in Southern Spain. After studying fine arts at the University of Granada, he became an illustrator of historietas, as comics are called in Spain. But the 1990s would prove a difficult period for newspapers and comic book publishing. This pushed Munuera to leave Spain for Angoulême, France. His hard work convinced French publisher Delcourt to publish his first series, with Joann Sfar as the writer. Together they created the series Les Potamoks. When it met with limited success, the dynamic duo pitched their work to another publisher: Dargaud. And thus came into being the adventures of Merlin, the famous magician who was never far from loyal companions Tartine the ogre and Jambon the pig. The series captured quite an audience, and when Sfar no longer had time to produce the scripts, their ongoing adventures were penned by Jean-David Morvan. This would be the beginning of a long artistic partnership between Munuera and Morvan.  The science-fiction bestseller by Morvan and Buchet, Sillage (Delcourt), was transformed through Munuera’s artwork into a children’s series called Nävis, which ran for six issues. Meanwhile, Dupuis contacted the Morvan-Munuera duo to take on the reboot of its hallmark character: Spirou. To this day his productive collaborations continue with the series Sortilèges (Dargaud; Spellbound, Europe Comics 2015), scripted by Jean Dufaux, and Fraternity, scripted by Juan Diaz Canales, for which the compilation was released in 2014 by Dargaud. The same year he started a new creation of his own, taking care of both the art and script: The Campbells.

How did you decide to become a comics artist? And if you didn’t, what other career do you think you would have chosen?

In my mind, I’ve been a cartoonist since I was eight years old! I decided quite soon that I wanted to get involved in telling stories visually, mostly cinematically. But, at the time, it was awfully expensive to buy Super 8 supplies, and the kind of latex I wanted to create monster make-up, or the plastic needed to build models, was impossible to find in my small town in the ‘80s in the south of Spain. So, I took a pencil, paper and a ballpoint pen and forced myself to learn how to draw: that way I could do the same things I wanted to film, but with only my hands. The plan sounded perfect, but it took me YEARS to have any kind of drawing skills! And I’m STILL at it!

Many artists have influenced me: the first one was the Italian artist Giorgio Cavazzano, who worked for Disney. At a time where all the Disney cartoonists worked under the shadow of the Disney name, he was the one among all the others that I could really appreciate, recognize, study and collect. His energy, sense of positioning and postures, and his personality were my first contact with something similar to authorship recognition. After him, Uderzo, Franquin and Morris lay the foundations of my drawing, but this Franco-Belgian influence was strongly compromised by American comic books (Simonson, Miller, Byrne…) and manga (Otomo, Miyazaki, etc.). Anyway, it’s a continuous and lifelong process, learning from all the great cartoonists all around the world.

To be honest, I’m still highly attached to paper. I read digitally mostly to discover things… to buy the print edition later!

Tell us a bit about The Campbells. What is the story behind the book? How did you come up with the idea and what was the process of creating it like?

I wanted to create a choral story, a complete, vast universe with plenty of characters, something like a symphonic orchestra playing a fun opera together. I wanted to tell a family story, for what we call tout public — kids and adults — trying to recreate the emotions I had when I was a kid and went to the movies or read a comic. The magazine Spirou asked me to write a short story about pirates, and so I did the first chapter. After that, I just continued to develop the universe, chapter by chapter, and then added a secondary storyline (the relationship between the two pirate brothers) that ended up becoming the main plotline. I’m totally free with this series, in control of both the script and art. I allow myself a lot of improvisation and indulge in a good number of eye-popping images, slapstick action and wild nonsense — but I am also quite serious about the structure of the overall series. My goal is to create credible characters, with complex personalities, which the reader can relate to. And to mix humor and action with deeper emotional sequences.