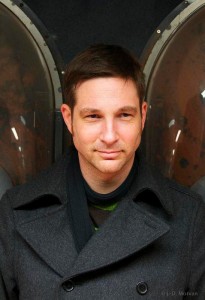 I started reading comics very young, age 6 or 7. After graduating from university I worked in a comics store for several years, before getting a job at Humanoïdes Associés, where I stayed until the early 2000s. After injuring my leg, I had to spend several months rehabilitating, and that’s when I really started writing scripts in order to pass time. So it came pretty late in life; I was already thirty by that time. Then I realized that I actually really enjoyed it, so I continued writing, but without really thinking of making it a livelihood.

However, I did start sending out my draft scripts to publishers, and after a few months I was signed up for four projects, which even allowed me to support myself financially. So I decided to quit my job and devote myself to writing full time. All in all I’ve had 3 jobs in my life – all related to comics. And if I had to choose another profession, I think it would be journalism.

From the scriptwriter’s point of view, authors who first made me think of writing purely for comics are Luc Brunschwig, Alan Moore, Pierre Christin and Warren Ellis. I was inspired by the way they build the story, the psychological approach to their characters, and often the socio-political aspect of their work.

I’m inspired by comics that deal with subjects I feel passionate about as an individual, as well as works that show that any subject can be addressed by this medium. I myself got a Master’s in history with focus on French politics. And thus, our existence, in all its aspects, past and present, is probably my biggest inspiration.

Which illustrator (dead or alive) you would have loved to collaborate with?

I can only choose one? That’s impossible! I would have loved to work with these three: Moebius, Sean Murphy and Naoki Urasawa.

Looking at what is happening over in the US, I think it’s a great opportunity for readers, authors and publishers, and that it will inevitably continue to grow in balance with the paper format. However, it’s important not to make the same mistake as in the music industry, i.e. not allow the authors to lose out as a result of this transformation. For digital editions, we can’t really claim the same percentage in author royalties; that would be absolutely unjustified.

While I understand that there are initial investments made into producing digital editions, I think that the royalties paid to authors should be equivalent to those received from selling any other subsidiary rights (excluding books). The financial pressure faced by authors is already very high, so we must ensure that all participants of the book making process profit from this opportunity, especially the authors, without whom the industry wouldn’t exist. 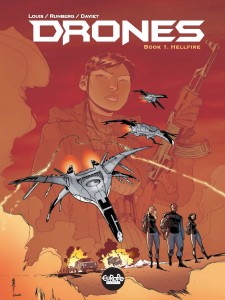 Tell us a bit about Drones. What’s the story behind the book? How did you come up with the idea and what was the process of creating it like?

As I already mentioned, my major source of inspiration is our existence. Past or present. The events of Drones take place in the near future, on a Danish base of the European armed forces. That’s where a team of military drone pilots operates after a conflict erupts in China. One province gains independence, and a Catholic minority suffers from repressions carried out by the newly established government, supported by European policies: factories owned by European groups are built on the territory, mainly for economic reasons.

It is under these circumstances that a Catholic terrorist group carries out attacks against the local government and the European plants. And the drone pilots based in Europe are in charge of finding and eliminating the leader of this extremist group – Yun Shao. So a virtual show-down takes place between this woman and a drone pilot based in Denmark, Louise Fernback. The latter knows everything about Yun Shao without even setting foot in China, while Yun Shao doesn’t even know of Louis Fernback’s existence.

Obviously, there is nothing virtual about that war on the ground. The victims – military and civilian, Chinese or European – are very real. The story resonates with the current debate surrounding the increasingly frequent usage of fighting drones, and the moral issues arising from it. Soldiers themselves empathize the danger of killing other soldiers from a distance, without having any real contact with their targets, their victims. Drones is the story of these two women, Yun Shao and Louise Ferncack, fighting a battle to the death while separated by thousands of kilometres.

Sylvain Runberg will be with Europe Comics in London April 12-14. More details here.