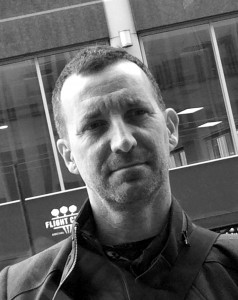 Philippe Nicloux was born in 1972 in Nice, France. With MkDeville as scriptwriter, he illustrated in 2008 and 2010 Rashomon and Otomi, adaptations of short stories by the Japanese writer Ryunosuke Akutagawa, and Tropique de l'agneau with publisher Les Enfants Rouges. In 2013, with Laurent-Frédéric Bollée, he illustrated Terra Australis (Glénat), an ambitious 500-page fresco devoted to the foundation of modern Australia at the end of the 18th century. Terra Doloris, the sequel, was completed in 2018. In the meantime, the two accomplices published Matsumoto in 2015, devoted to the actions of the Japanese sect Aum, which carried out the sarin gas attacks in the Tokyo subway in 1995. In 2019, alongside Olivier Balez he illustrated the second volume of The Adventures of the Prospero Group with a script by Noël Simsolo, once again with Glénat. Finally, he met Laurent Galandon who offered him Babylon (Le Lombard; Europe Comics in English), a story co-written with Frank Giroud, which gave him the opportunity to fulfill an old dream: illustrating an adventure thriller in the purest tradition of Franco-Belgian action series.