Born in 1970 in Bourg-en-Bresse in Eastern France, Olivier Marin is a graphic designer and webmaster, but also the author of several comics. Since childhood he has been passionate about comics, especially the Franco-Belgian comics of the '50s and '60s featuring the famous “clear line” of authors like Hergé and Jacobs. But memories of childhood outings in his father's 1936 Citroën were the origin of his second passion and another source of inspiration for his future comics. As a child, he drew his first comic book about the legendary Citroën 2 CV. After becoming a computer graphics designer and webmaster, the self-taught cartoonist was spotted in 2003 by the Geneva-based publisher Pierre Paquet. In October 2007, he published his first comic book, Michelle: Les Mystères de l'Est, which won a prize at the Moulins festival. Then the success of his second book, Le Mystère de la Traction 22, introduced him to the general public. His most recent work includes the artwork for Cannonball, in Michel Vaillant Season 2 (Graton Éditeur, Europe Comics in English). 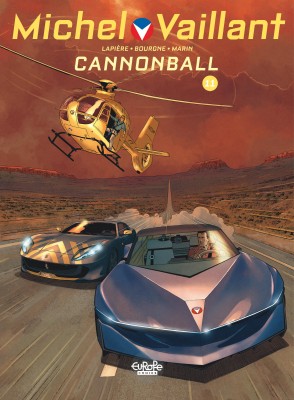 Michel Vaillant is not one to back down from a challenge. But when car fanatic Pog throws down the gauntlet, calling on Michel to join him in the legendary Cannonball Run, the French legend has... 4,99€
Michel Vaillant 11. Cannonball Marc Bourgne, Olivier Marin & Denis Lapière