Born in Béthune, France, in 1958, Didier Vasseur, alias Tronchet, would turn out to be one of the most subversive comics artists of the late 20th century. Having first studied law and journalism, he became the editor in chief of Métropoche, a small magazine based in Lille, from 1983 to 1986. Through strength of will and hard work, Tronchet gradually developed a personal and highly effective illustrative style, with his work soon being featured in Pilote magazine before being published by Glénat. Tronchet dedicated himself to overthrowing classical ideas of humor, and major publishing houses began seeking his work, which alternated between the totally grotesque and life's great social tragedies, including Les Damnés de la terre (Delcourt, 1987), a series of silly misadventures entitled Jean-Claude Tergal (Audie, 1990), "La France au fond des yeux" (in the magazine L'Écho des savanes), the script of Bienvenue à Welcome Land (Fluide Glacial/Audie 1998), and the script of Patacrèpe et Couillalère at Delcourt. In 1998, his landmark two-part series Houppeland (Joylandia, Europe Comics) was released in the Dupuis "Aire Libre" collection: an epic story that defies description, in which tragedy, off-beat humor, modern-day caricatures, and wild imagination are finely interwoven in a depiction of the most cheerfully sinister of political regimes. 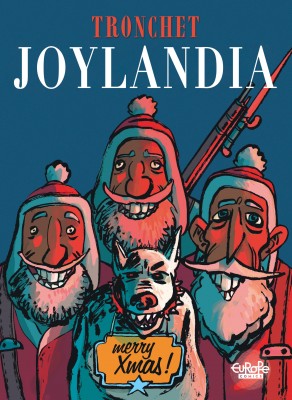