Home > Creators > Denis Rodier
Denis Rodier was born in Quebec in 1963. As a comic book artist he has worked for the likes of DC Comics, Milestone Media, and Marvel Comics. It was in 1986 that he began a career as an illustrator, which would lead him, two years later, to the world of comics. Among his first work for DC Comics was a Batman story published in Detective Comics #589 (August 1988), and his portfolio includes other world-famous characters like Captain America and Wonder Woman. It was his work on Superman that garnered Rodier his greatest acclaim, including the award-winning The Death of Superman story arc. As a painter, his work has been seen in such publications as the illustration compilation Arzach: Made in USA, and his freelance work includes work for such clients as Tony Levin (Peter Gabriel's band), Pat Mastelotto (King Crimson), and Suzanne Vega. He joins the Europe Comics catalog alongside Tristan Roulot with the graphic novel Arale (Dargaud), which reimagines a Russia that never was, blending fact and dark fantasy into a spellbinding fable on the price of power. 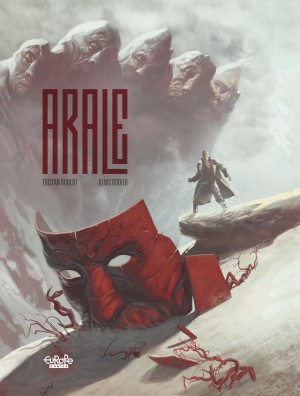