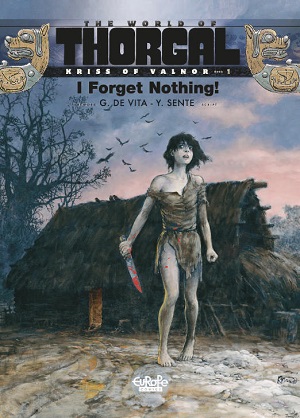 Kriss of Valnor- 1. I Forget Nothing

Of all the enemies Thorgal has faced in his life, Kriss of Valnor is by far the fiercest. She is also one of the most ambiguous, as the mother of one of his children and someone who has committed countless unspeakable acts. Can she find redemption? Perhaps, as Kriss sacrificed herself to save not only her son Aniel, but also Thorgal’s wife Aaricia. An act of selfless bravery for which she’s rewarded with waking up in the kingdom of the gods. But Valhalla is not quite yet hers… She is brought before the valkyries to face up to her deeds and have her life judged by the goddess Freyja.

Kriss of Valnor- 2. The Valkyries’ Judgement 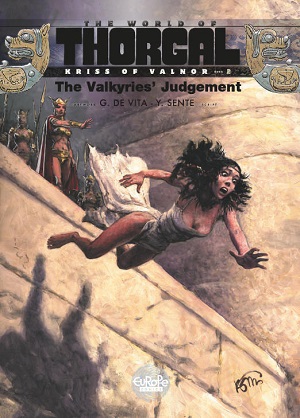 Kriss has been brought before Freyja at the Valkyrie tribunal to recount her life story and be judged for her cruel deeds. Victimized early in her life, Kriss fought back and managed to gain her freedom and independence. She then quickly became the bully herself, allowing her worst instincts to rule her. Until, one day, her past caught up with her, and her horrific revenge turned out to have serious consequences–including for Freyja’s final judgement… 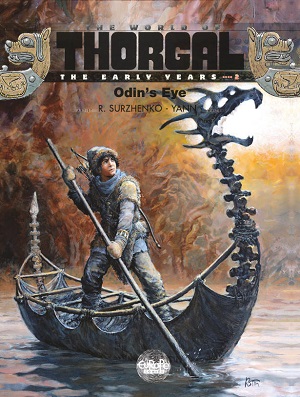 Thorgal, a young skald living a tenuous existence within a Viking tribe, has given his word to save the Minkelsönn sisters, who have been cursed to live as whales. The village is starving, though, and Thorgal has very little time to save the sisters’ souls before they kill the whales for their meat. He sets off on an adventure to beg the gods for their help. But Freyja, Odin, Ænir, and the rest of the Norse gods are not so easily bargained with. Thorgal will have to use all of his cunning, singing, and luck to save the Norn sisters… 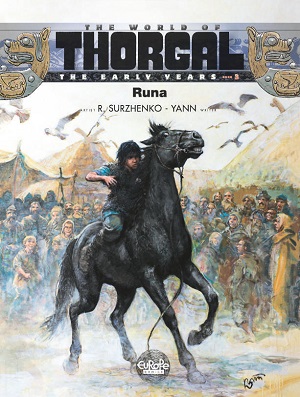 In the next chapter of the saga of the skald’s early years, Thorgal is in love! He and Aaricia are talking of marriage, of running away, of a future together. But Aaricia’s father, Gandalf-the-Mad, has other plans. A dozen handsome, strong, and mostly intelligent suitors have shown up to the summer festival of Sigrblót to fight for her hand in marriage. But there is another mysterious guest on hand for the festival: Runa, a shieldmaiden, who comes bearing a kingly gift for the village lord. But what is the true reason behind her visit? 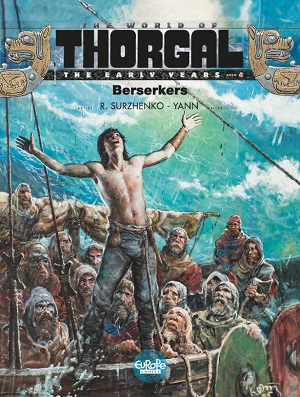 In the next chapter of Thorgal’s early years, Aaricia has been captured. It’s up to the young hero to save his beloved from the savage berserkers—unless one of his rivals gets there first. There’s Sigurd, the handsome drakkar captain speeding across the waves in pursuit of the berserkers, and Nigürd, the jarl’s squirrel-toothed son, who might have more up his sleeve than meets the eye… They’ll have to work together to survive the stormy sea and have any hope of rescuing Aaricia before the berserkers’ chief, Moldi-the-Furious, decides her fate. 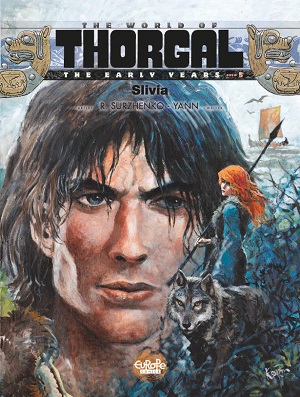 Young Thorgal is no closer to finding peace and calm, and neither are those close to him. Aaricia’s companions are about to be tortured by her own brother, and she finds no help in Thorgal, who is off on a desperate search for Hierulf. The wise man narrowly escaped death on the Sacrificial Rock, but hasn’t been seen since… Is he even still alive? Meanwhile, Gandalf-the-Mad is keeping a beautiful woman prisoner in a windbeaten tower. But this fiery-haired queen may have more to her than meets the eye…

The Early Years- 6. The Frozen Drakkar 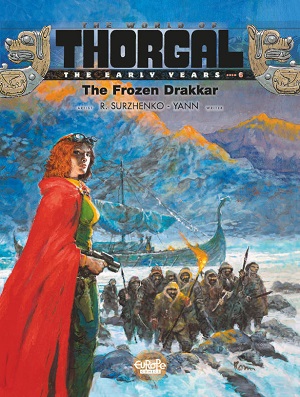 After years of torment, the Queen of the Frozen Seas has finally escaped the clutches of Gandalf-the-Mad… and it appears that she knows something of Thorgal’s origins. In order to find him, though, she’ll have to survive in an unfamiliar world that seems bent on revenge. Could Slivia be the last of her kind? Plus, Thorgal is desperately searching for the love of his life, lost at sea in a storm. He prays to all the gods and goddesses that, against all hope, Aaricia is somehow alive… While Thorgal is away looking for his son Aniel, his family faces the hostility of certain inhabitants of their Viking village. Thorgal’s daughter, the fiercely independent little Wolfcub, finds herself particularly targeted, as her strange talents make people ill at ease. Her ability to speak with animals will come in handy, though, when she finds herself caught in a trap with a genuine wolf. So begins an adventure that will take her far, far from home…

Wolfcub-2. The Severed Hand Of the God Tyr 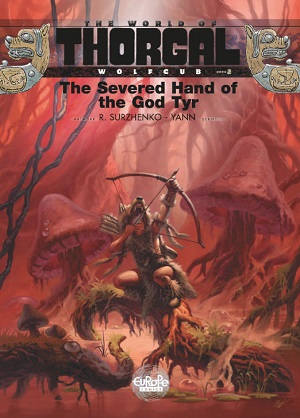 Stuck in the world of the mysterious Assalepson, Wolfcub has agreed to let the sorcerer extract her wild side. What she didn’t know was that he would use that wild side—a physical double of the little girl, filled with all her strength and aggressiveness—to attempt to retrieve a powerful relic from the realm of Fenrir the giant wolf! Meanwhile, back at the village, Aaricia must continue to deal with the villagers’ hostility… as well as the handsome Lundgren’s insistent attempts to seduce her. 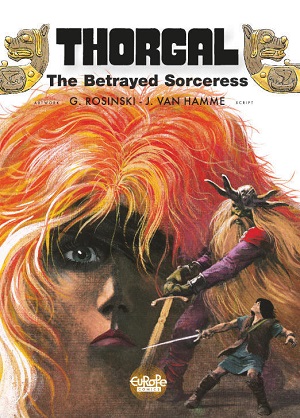 Thorgal’s coming-of-age is painfully similar to the rest of his life: the young man finds himself tied up to the stone of sacrifice by Gandalf the Mad, king of the Vikings of the North and father of his beloved Aaricia. There, the Child of the Stars can do nothing but wait for the coming tide—and death. Until, that is, a mysterious sorceress with flaming red hair comes to offer him a deal: his life, and revenge, against one year in her service. Discover the first two volumes of the adventures of Thorgal, published in 1980, translated into English at last. 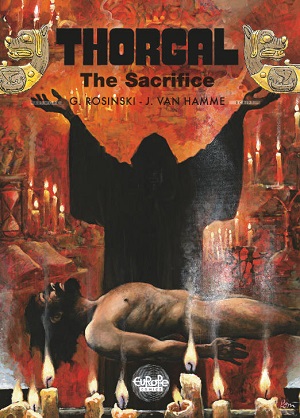 Thorgal’s family is once again reunited, but the future is bleak. The hero is unconscious, dying, and his wife and children are exhausted and starving. Aaricia’s prayers bring her some hope: the goddess Frigg is willing to save Thorgal. However, her husband, Odin, is determined to get rid of the troublesome Child of the Stars once and for all. So begins one more challenge for Thorgal and his son Jolan – a chance to obtain what they’ve always dreamed off: a quiet, uneventful life… 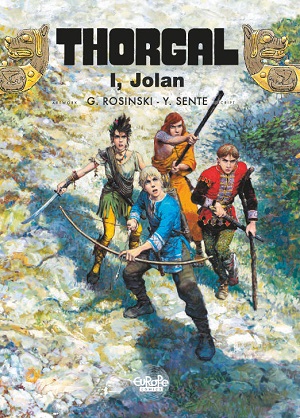 Jolan has agreed to leave his family and serve Manthor, who saved Thorgal’s life. The mysterious mage has promised Jolan an exceptional destiny—if, that is, the young man proves worthy of it. So begins a series of trials during which Jolan, on his own at first, will meet four other youngsters. They, too, have unusual powers. And they, too, are on their way to Manthor’s castle. Will they be allies, or enemies? 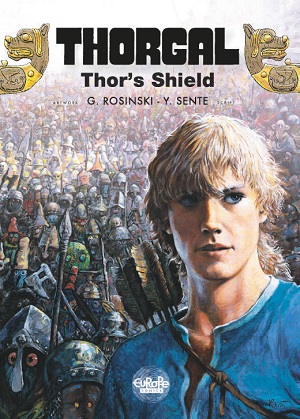 Thorgal- 24. The Battle of Asgard

As Thorgal pursues his son Aniel’s kidnappers, his eldest son Jolan prepares to enter adulthood. After enduring countless ordeals, Jolan must now accomplish the toughest of all: enter the realm of Asgard and retrieve from its gardens a special piece of fruit—the only way to save his mentor’s mother. Jolan has an army at his back, but will that be enough against the treacherous Loki? While Jolan and his companions finally learn from Manthor what their grand destiny will be, Thorgal is still on the trail of the men who kidnapped his other son, Aniel. Along with the jolly mercenary Petrov, he sails down a frozen river aboard a blade ship—a trade vessel specially equipped to break the ice. The journey will be fraught with danger of all kinds—storms, raiders, spies, wild animals…—as well as a group of shipwrecked Vikings looking for a mysterious chest. 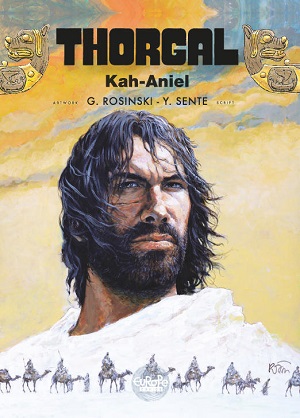 After the icy north, Thorgal and his companions now face the oppressive heat of the Middle East. On the road to Bag Dadh, the reluctant hero has gotten dangerously close to the bewitching Saluma, who tells him the story of the Red Mages—the very same who kidnapped his son Aniel. It doesn’t take long for Thorgal to realize that he isn’t just mixed up in a simple crime, but in political machinations that could determine his fate, as well as that of the entire city. 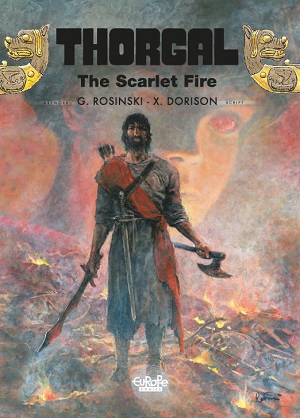 Thorgal has failed. Despite all his efforts, he came up short in his attempt to save his son Aniel, and was forced to look on as sorcery transformed the young, mute boy into a teenager with terrible powers: the reincarnation of the Master of Red Magic. Our Viking hero, however, is convinced there is still a chance, and isn’t yet ready to give up. But many threats are converging, from within the city and from afar, and the stakes may in fact be much higher than Thorgal imagined… Thorgal and his friends are finally on their way back to the lands of the Vikings of the North. Time is of the essence, for his son Aniel is still possessed by an evil entity, and he is weakening by the day. But the trip is fraught with danger, and soon they find themselves marooned on a mysterious shore. Thorgal will have to fight once more to give his son a future…