French-Canadian artist and author Mikaël has been involved in the comics scene since 2001. He has published numerous titles for younger readers as writer, illustrator, and colorist. He has also illustrated many children’s books, with a very recognizable graphic style, full of color and nuance. Since 2006, Mikaël has also been working on stories geared toward adult readers, with more realistic artwork, both solo and in tandem with other authors and artists. In this vein, publisher Dargaud and Europe Comics published the remarkable Giant, a two-part series that takes place in New York in the 1930s (watch the preview here).

How did you decide to become a graphic novel artist?

I’ve been drawing ever since I was a child. Like many other comics authors, it was my way of expressing myself, and I never stopped. Children will often stop drawing around ten years old to play sports, play music, video games, whatever. But I continued. I had grown up with the classics — Tintin, Asterix, Valerian — and I made my own comics, too, as a way of telling my own stories. That’s how I got started, and I simply never stopped. Even if I never studied art or illustration.

Exactly. And once I’d graduated from college, once I was financially independent and living on my own, I decided to go back to comics, because that was what I really wanted to be doing.

If you hadn’t become a comics author, what other job do you think you would be doing?

Physical therapy. That’s actually what I studied in school. Nothing to do with art and drawing, as you can see.

It’s interesting, because it’s so very different. Other creators tend to say that they’d be a fiction writer, or a painter. So who would you call your role models in comics? Which other creators inspire you?

I pay close attention to the work of artists like François Boucq, Ralph Meyer, and Giraud, especially in terms of how they do their inking. There’s also the American artist Sean Murphy. I’ve learned a lot from studying his work. Urban Comics has published some of his graphic novels with just the inking, and I’ve spent hours looking through them, trying to understand how he does what he does. Sean is an artist who’s extremely dynamic, with spreads full of splatter. I love his work.

Yes, we’re familiar with his work as well. We did an event with him at the New York Comic Con in 2016, alongside French authors Matthieu Bonhomme and Jean-David Morvan.

I’m not very far from there myself, living in Quebec City. Just a nine-hour drive from New York City.

Giant is your work – you both wrote and illustrated the two-part story. But if you had a chance to collaborate on something with someone else, dead or alive, who would it be?

I’ve collaborated with a scriptwriter in the past — just before Giant, I had a series called Promise, published by Glénat, where I was the artist and colorist. But if I could do it again, and work with another writer, it would have to be Fabien Nury, the author of Tyler Cross. I love crime fiction, especially a bit darker, and I would love for him to write that kind of script for me.

As for Giant, how did you come up with the story? What inspired you?

It’s really a love that I’ve had for New York ever since I was little. I wanted to create a story that took place in New York. Although not something from the present day — as an artist, drawing modern-day cars and clothing bores me. I wanted something historical. But I couldn’t find the right angle. I had a few good ideas — for example the freak shows of the time — but I wasn’t really satisfied. Then I came across the picture “Lunch atop a Skyscraper.” I had seen it before, but here I happened across it again by chance, and I knew that was it. That was the story I had to tell. And as I looked deeper into what lay behind that photo, I discovered the whole historical context of the 1930s — the Great Depression, Hoover, Roosevelt’s election. Through the lens of the ‘30s, I’m able to tackle a number of contemporary themes, such as immigration.

As an artist, what was the most fascinating thing to draw? Was it the people, the city…?

What I’m trying to do here is to depict New York City as a character — for me, the city is a character. So in the way I draw its streets, its buildings in the distance, shrouded in fog, I try to give the city life, so that it becomes a full character in itself. Beyond that, what interests me is the human element — what they experience, what their problems are, what they’re facing, and how they’re able to manage at a time when the Great Depression made everyone’s lives so difficult.

Throughout, the book also has a very cinematic feel.

That’s what people tell me, I don’t know why!

It could be the radio, which serves as a kind of narrator. We get much of the story that way. Much of the story is told without words, too, which also feels cinematic. How did you come up with this kind of storytelling approach?

Up until the end I wasn’t sure if I was going to include the radio, because it’s really not essential. It could be removed, and the opening pages would just be silent, showing Giant going about his daily life. But for me, New York is frantic, almost epileptic, full of information and stimuli. There’s Times Square of course, and noise coming from every direction… It’s overwhelming. So from the very start of the story I wanted to have this excess of information, with two narratives going simultaneously: the illustrations on one hand telling Giant’s story, and the radio host on the other hand telling a different story. This dual storyline makes things more dense, and more intense, which for me is exactly how New York is.

That’s another of the cinematic aspects, with so many things happening at the same time.

Yes, that’s what I wanted to recreate, and it’s true that the radio host serves as a kind of narrator-in-disguise. We also find him again at the end, bringing things full circle. And this extra level of dialogue is the perfect way to contextualize the story, whether it’s politics, the elections, or the Yankees, which all help to immerse the reader in 1930s New York.

Now the second part of the story has just come out… Can we hope for a happy ending to the story?

Definitely not a Hollywood happy ending! A true happy ending maybe, something that could actually happen in real life. The idea is that Giant, who was never able to properly mourn his past in Ireland, has to do it now. So either he does, or he doesn’t. If he doesn’t, he sinks into depression for good. But if he manages to accept his past, then maybe he’ll finally be able to move on… But ending with a romantic scene in the countryside, no, I don’t think so!

What are you working on now? What’s your next project?

In fact, Giant is the first chapter of a trilogy set in New York City in the 1930s and ‘40s. Each new chapter will be in two parts, with New York itself serving as the common theme and main character. The cast of characters will be different, with maybe a little cross-over between the different stories, but always with the same setting and time period. The feel of the next chapter will be different, though, more oriented toward crime fiction, in the spirit of Once Upon a Time in America. It will be called Bootblack, and will tell the story of the shoeshine boys of the time. And if that works, then there will be a third chapter, again in two parts, set in Harlem in 1931. 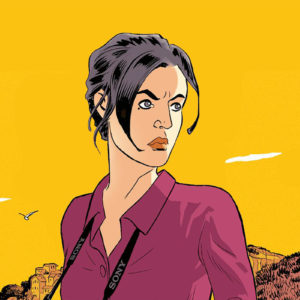